LG Electronics is one of the manufacturers that are expected to be active at the IFA trade show in Germany at the end of the week. Among the news we find two exciting monitors that focus on an ultra-thin profile, the latest 3D technology and IPS panels. The LG E91 comes with a very thin profile of only 7.2 mm, while the LG D237IPS both offers a high-quality IPS panel and a third dimension by means of passive 3-D technology. 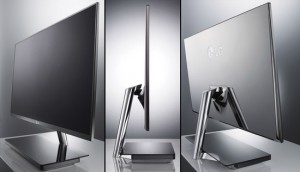 LG E91 is certainly an elegant part of the manufacturer’s new monitor lineup. It’s a 23-inch monitor with a very slim frame that have resulted in the manufacturer having to move the connectors to the stand. There’s no mention of the panel type for this one, but LG promises a resolution of 1920 x 1080 pixels and 16.7 million colors. The dynamic contrast ratio with LED backlighting is an entire 10,000 000:1, while brightness is measured at a more moderate 250 nits. The viewing angles are 170/160 degrees and the response time a mere 2ms (G2G), which seems to indicate that we are dealing with a TN panel in this case.

The LG D237IPS focuses more on performance than unique design choices. It consists of a 23-inch IPS panel that makes use of the passive 3D technology Film Pattern Retarder (FPR). By embedding the active sync circuits in the screen you need only a pair of basic polarized 3D glasses instead of the more expensive and battery-powered active shutter variety. This provides a flicker-free 3D experience which, according to LG also reduces crosstalk, which can cause symptoms such as dizziness and headache.

Thanks to the IPS panel in the D237IPS, LG promises improved viewing angles even when watching 3D. The display also has support for converting 2D to 3D, and automatic brightness. The display’s specifications include a 1920 x 1080 resolution, 1000:1 static contrast and viewing angles of 170/160 degrees in 2D or 130/120 degrees in 3D. The brightness changes depending on the image mode, 250 nits for 2D and 100 nits for 3D viewing. When we can expect from LG’s new monitors on the market and at what price is still unclear, but there will probably be some sort of announcement at IFA in Berlin in less than a week.

We will be happy to hear your thoughts

This site uses Akismet to reduce spam. Learn how your comment data is processed.